Donna Rocks
My main focus at this time is.... "To forget about my life situation and pay attention to my life". 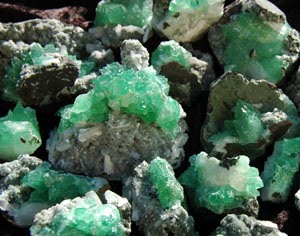 The following information on this stone has been taken from a great website that I very much recommend.  This is just a partial description of the stone.  For the full article go to:  http://www.oursacredstone.com/stone-of-the-month

"The Green Apophyllite works directly with the Heart chakra.  It gently surrounds the Heart with White Light bringing with it a powerful sense of Peace throughout the Etheric and Physical bodies.  This gentle delivery of White Light seems to simultaneously enter and activate the Subconscious mind, allowing it to comfortably open our awareness to Source (The God seed that lives within us) in a manner that we may not have been emotionally able to previously explore.  The bottom line of this energetic action is that we slip effortlessly into a state known as homeostasis which is actually our Natural balanced state of BEING.  This brings a sense of Pure Peace to all aspects of the Self.  At this point all four bodies (Mental, Emotional, Physical and Spiritual) are not only balanced, but completely operational ~ they are Whole and Complete within themselves!

This is where the grand and unique vibration of this stone delivers strength to us.  This gentle sweet delivery seeps into our Subconscious activating a deep core of understanding of our own harmonic expression.  It reveals an ability to tap into a conscious comprehension of the relationship we have between our Emotional and Spiritual Bodies!  As we become more comfortable with this new vibration we may find ourselves stepping into not only a more intellectual understanding of our relationship with Source…but a more physical one as well!  This comes as effortlessly as breathing!  It’s as if we have stepped into a Harmonic Healing Bath that reminds us how to live in the natural perfection of ourselves!


It not only supports our own deep innate awareness of our unique DNA architecture, but shows us what a truly precious component of Source we are.  When we enter into this state of combined consciousness, we can often glimpse or more often, actually FEEL that we are joyfully supported and enfolded; within the Divine Power of Life itself!  -In other words, we can allow ourselves to be nurtured with and by all that is around us, and simply slip into all that serves us!  With this stone we can come to the understanding that all that is around us AND within us is part and parcel of the Grand glue that Gifts us with whatever experience we desire!


When this state, consciously or unconsciously is attained…even for just a few moments, our system is so miraculously effective at shifting into our perfect DNA blueprint that the Medical community and pharmaceutical community has spent many years and countless dollars trying to develop a substance that will induce a sleep that will activate this state.


Of course, this state will not be attained, even with this stone, if we are not in agreement to experience this process.  This stone brings the comfort to explore the opportunity for Healing on a deep and profound level, ONLY if we truly choose to move into that state.  Remember, that we are all in the place we are, for a very specific purpose.  We may in-fact be in a mental or physical state that “looks” like imbalance to the rest of the world, yet we may indeed be living in the perfect Gift to us in the moment."  ~ Our Sacred Stone

Posted by Donna Rocks at 3:30 PM No comments:

Sacred Stone
Posted by Donna Rocks at 2:40 PM No comments:

I just read the following in the April 2012 issue of Popular Science Magazine. I found this quite interesting.  Another use for this awesome crystal....low tech.


The Viking Sunstone
1.       A thousand years ago, Vikings navigated with a sunstone, which they used to locate the sun on cloudy days.

2.       The stone – a calcite crystal called Iceland Spar – funnels light into two beams.  When the beams appear equally bright, the rock is facing the light, even if it’s obscured.

3.      Researchers now use calcite to funnel light around tiny objects for ‘invisibility’ cloaks.
Posted by Donna Rocks at 12:43 PM No comments: 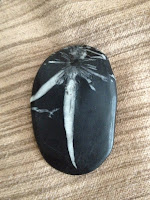 With Beauty comes Grace and gracious we must be when in the presence of this rare Beauty.  Like the flower it is named for, it brings a precious and unique healing vibration to all in its presence.


The Chrysanthemum Stone introduces us to living in Grace by gently awakening us to the beauty in our world, almost requiring us to "Stop and smell the flowers."  Like a bouquet of flowers, it "freshens up" a room, releasing 'stale' energies, even giving a new 'fragrance' to historic moments that may have been held by some as less than pleasant.


This delightful being can send us on a path to discover peaceful and harmonious relationships that open us to the larger, rare and often subtle opportunities that are presented to those who live their life in Grace. 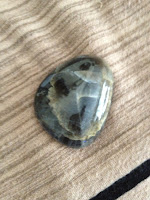 
This unique stone from Madagascar illuminates our own interior pattern (our Soul's DNA), strengthening the connection between the Soul, the subconscious and conscious mind.  This allows us to act upon our purpose "wholey,"  engaging all four bodies, from moment to moment, in bigger, more Joyous ways.


This beautiful mystical stone also has the ability to shed light on "The Dark Night of the Soul" revealing to the mental body the practical aspect of pain (emotional or physical). This allows the mental body to then rationalize or detach our Emotional body - and often our physical body - from the pain, bringing solace and understanding to the experience for the purpose of "moving through" it. 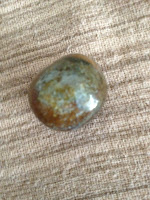 
This multilayer powerhouse holds a core of deep wisdom and strength reserved for those who respect the magnitude of change and effect that Pure Love brings.


It gently reveals lessons of "choice" ~ the difference between "helping and controlling" ~ "sharing and demanding" ~ "receiving and taking".  It can activate the natural wisdom in the Solar Plexus - imbuing the Healer with clarity to choose when to continue and when to allow the recipient to move forward on their own.


When invited, it allows Healers to be Healers in the strongest sense, supporting both the act of Healing AND the Healer with the endless dynamic Light and Pure LOVE.

One of my last creations.
Posted by Donna Rocks at 2:32 PM 1 comment: